WhatsApp us Get me there with Maps

A classic we all know and love, but 7 generations later and as iconic as ever. Ford is ready for its live debut of the brand new Mustang on Wednesday, September 14, at 8PM.

Ford announced at the 2022 Woodward Dream Cruise that it will welcome Ford Mustang owners, fans, media and its employees to The Stampede – the global debut of the all-new, seventh-generation Ford Mustang taking place at the Detroit Auto Show on Sept. 14 at 8 p.m. EDT. A camouflaged version of the vehicle was on display. 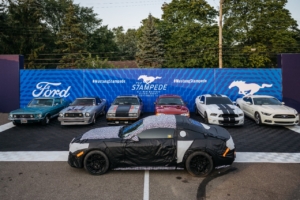 Ford has been keeping us all at the edge of our seats with powerful and exciting teasers of the all-new Mustang; but the time has finally come for the world of Mustang fanatics to stampede the internet and get ready for the Global Debut we’ve all been waiting for. Ford will be revealing its latest ‘Stang during the Stampede event in Detroit, and we all get to watch it live on YouTube.

The teasers that Ford has been putting out haven’t revealed much about the new pony car, besides our own impatience and eagerness. But what we do know is that the teasers reveal the Stang’s V8 power and the continuation of a manual transmission. This continuation was confirmed by none other than Jim Farley, the CEO of Ford himself. 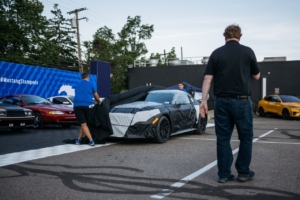 We are pleased that you have chosen Yrausquin to take care of your mobility needs and we want you to know that we are dedicated to provide you exceptional service and experience.

In 2022 we are proud to celebrate our 70-years anniversary together with you.

Scroll to top
Open WhatsApp
1
Chat with Yrausquin!
Welcome at Yrausquin. Please click on 'Open WhatsApp' to send a message